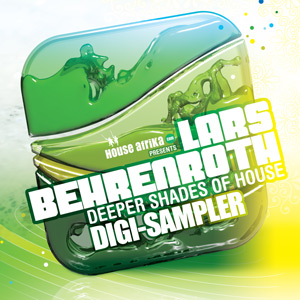 DIGI-SAMPLER EXCLUSIVE:
DA CAPO's JUNGLE BEATS MIX of Marco Fracasso's 'XIBA CHANT' is previously unreleased and ONLY AVAILABLE on the compilation and this digi-sampler.

About the CD (available in South African music stores like MUSICA and LOOK & LISTEN):
The latest lush mix from the resurgent House Afrika label is selected and sequenced by Lars Behrenroth, one of a few established international DJ/producers who are helping to spread the gospel of deep South African house music across the globe.

German-born and LA-based, Lars has a wide view of the wickedest in the house music world, and – along with the likes of Louie Vega, Andy Compton, Ralf GUM, Rocco, AtJazz and Boddhi Satva – he’s seriously attuned to the ever-more awesome beats being brewed up on Africa’s tip.
His debut SA-exclusive mix showcases the increasingly Afro-centric leanings of the international dance set, sweepingly matching material from the aforementioned Rocco, Boddhi Satva and AtJazz with funk flair tailored by this country’s brightest production prospects, such as Kagiso ‘Kaygee’ Pitsong, Cuebur with Nathan X, and Da Capo (who recently impressed with a killer reworking of Andy Compton).
“Deeper Shades” has been Lars’ trademark tag in his 20 years plus at the top of the dance game: his ‘Deeper Shades Recordings’ is the source of all thirteen cuts on this CD, which shares a name with his ‘Deeper Shades of House’ radio show. Closing in on 400 episodes, this weekly deep-cast has featured guest sets from the likes of Vinny Da Vinci, Louie Vega, Ben Watt and many more.
The phrase “Deeper Shades” is also the most apt summation of Lars’ overall approach to dance music: that it should be deeply moving, all enveloping and soul expanding. Deep Afro-house is currently ticking all of these boxes.

The disc also includes no less than four, floor-stealing efforts from Behrenroth himself, and everything’s loving laced together into a splendid showcase that demonstrates the deep links between established US and European beat-technicians and new African know-how.
In other words, it’s hotness personified.

Written and produced by Marco Fracasso
Remixed by Da Capo

Written and produced by Fabio Genito
Remixed by Anthony Nicholson

Written and produced by Lars Behrenroth