The jetlag was def. working me on Saturday. After I was finally able to sleep at 3.30 am I already woke up again at 7.15 am and couldn't go back to sleep. I think it had at least partially to do with the fact that I didn't have a heater in my room, or at least I thought. Remember, it's winter here. Later in the afternoon Ralf Gum's wife was kind enough to let us know how to work the machine that we thought was just an A/C and now it's nice and toasty in our rooms :)

Halo and I enjoyed an early breakfast at our hotel and hung out until we got picked up early afternoon. First stop was lunch at Christos Katsaitis' restaurant Shaguma were we tried Christos Lamb Chops. Greek style, oh yeaaahhh .. they're the bomb. And yes, I should have taken a picture. Next time. 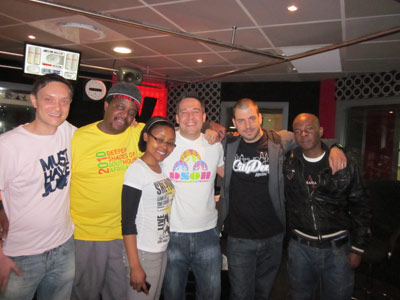 Then it was off to pick up Ralf from the airport who had played in Durban the night before with Christos. We went directly to Yfm radio to be guests on Oscar 'Oskido' Mdlongwa's show 'Oskido's church'. Each of us gave him a 30minute mix and were interviewed individually to talk about music, our labels, DJing and what we're planning to share during the panels and sessions at the SAMC. We had a really good time on his show and left to meet Christos, his wife and Ralf's wife at dinner. Jetlag was present once again, I couldn't eat much and started to get really tired.

LUCKILY I had a chance to take a one hour nap before we would make our way out to Ekhaya Lounge for the first SAMC party this year and my first gig ever in South Africa.

OOOOHHHHHH DAMN, is how I would describe it.

It is my first time here so I only heard about people in SA and their love for deep house. It's almost an obsession. They were chanting 'Deeper Shades of House, Deeper Shades of House, Deeper Shades of House', when they just saw me making my way on the stage to setup and the energy in the room was boiling when I started my set with my remix of Gyasi's 'The Dance'. Biggest tracks during my set were 'The Dance', Busi Mhlongo's 'Awukhu Muzi (Blaq Souls Dance Mix)', Jay Tripwire & Boddhi Satva's 'Dema (Lars Behrenroth Remix), Rocco's 'Memories', Laid's 'Punch Up (Marlon D's Rmx) and Paolo Rocco's 'Yellow Brick Road' (to be released on Deeper Shades Recordings).
The real madness began once I was done with my set. First, EVERYONE was asking me to get one of the DSOH shirts. I hadn't brought any since we're still figuring out the best way to get them out to the people. Once I know where and how you can get them (besides ordering from this site of course), I'll post it on the site and my facebook fan page. 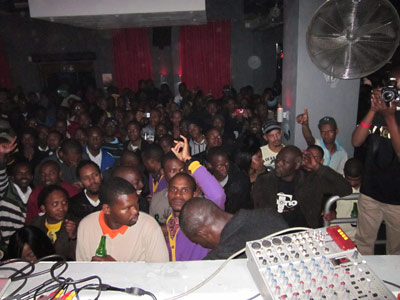 Second, EVERYONE wanted to say hello and take a picture. I've met people who are passionate about Deep House before but Pretoria is a different world. People wanted pictures but also had so many questions about what I do, my show, Deep House, other DJs and so forth. A lof of genuine interest and curiousity. This basically sums up the rest of my night. Walking around only to be stopped every two steps to be asked for pictures and more. A LOT OF LOVE.
I was able to catch the end of Halo's set who had the outside floor packed and crazy for him just as much and of course parts of Ralf Gum's set who followed me in the inside. People truly loved the entire night and all DJs delivered as expected.
After we picked up some lebanese chicken and salad we finally made it back to the hotel and I was asleep by 7.30am :)
Sunday was spent in a VERY lazy manner. Slept until 4.30 in the afternoon, chilled out, went to dinner and now are back in the hotel to finish and prepare some things for tomorrows opening of the SAMC. You can check out the program for the SAMC right here.

I'm excited to see what the conference and the rest of the week has to offer and will update you all tomorrow night with another post.

After a 23 hour travel Halo (Citydeep Music) and I arrived yesterday in Johannesburg. The flights were actually not as bad as I had anticipated, sitting in the same spot for that long at all. We had a good time in between flights. After the first leg - 4,5 hours from Los Angeles to Washington D.C. - we had a 2 hour stop over which we used to get some food and in my case also a memory card for my new camera (which I actually bought from a Best Buy vending machine at LAX since I couldn't find the charger for my regular cam).
We boarded South African Airways after the layover to find out that the flight would actually stop in Dakar, Senegal instead of going straight to Johannesburg. So, 7 hours later we arrived in Dakar but could stay on the plane before it took off to Johannesburg again .. FOR ANOTHER 8 HOURS .. aarrrgggg...  However, we used the time wisely and slept most of the time. 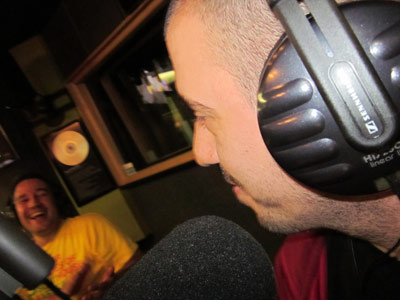 When we arrived in Jo'burg at 5pm we actually felt sort of rested and ready to go. I'm sure the excitement helped :)
We got picked up and taken to the hotel only to drop off our stuff, brush our teeth and change shirts. After that we went to dinner where we kept it light with some salads and appetizers. Timing was perfect as we arrived to SABC which is the headquarter of Metro FM. The Uruguay - Ghana game had just started and we were able to enjoy it before 'The Urban Beat' would start at 10pm.
Halo and I were the guests at the Jo'burg studio hosted by Zeal and T-Deep while Ralf Gum was connected from the Durban studio with Christos by his side and Vinny Da Vinci was at yet another studio (forgot the name of the city).
We had a great time and a dope interview with all of us on air at the same time from all different parts of South Africa.
Around 2am we finally arrived back at the hotel and I was able to get in 4 hours of sleep. You gotta hate jetlags :)

Anyway.. We just had breakfast and are about to be picked up to meet up with all the guys before we're playing our first party tonight. You can get more information about my gigs in SA right here.

We'll post more updates as time permits and hopefully I'll be able to add videos and pictures soon as well. Make sure you come back frequently and spread the word about our travel blog.

You can now order your own limited Deeper Shades of House South Africa 2010 T-Shirt!
ALL SHIRTS ARE SOLD OUT 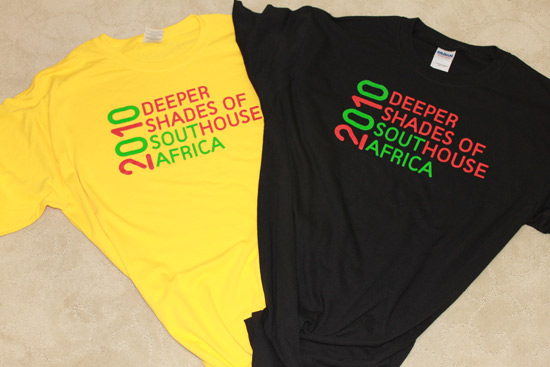 Prices start at us$ 20,- plus shipping & handling (us$5 for US Domestic & Canada and us$10 for International orders)
WE SHIP ANYWHERE THE US POSTAL SERVICE DOES! THAT MEANS WORLDWIDE
YOU DON'T NEED A CREDIT CARD TO PAY, DEBIT CARDS ARE ACCEPTED BY PAYPAL!