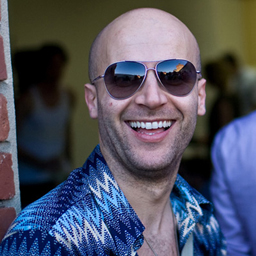 Fabio Genito is considered one of the best italian dj/producers and one of the most respected upcoming talents of the world musical scene.

He started djing early 90's , when he was only 12 years old (before with the pseudonym of "DJ Fix" and then as "Fabio G"), playin tracks from Mateo & Matos , Dino and Terry , Todd Terry, Strictly Rhythm, Moods & Grooves and Paper Recordings.

And he started playin as dj almost everywhere in Italy, alongside of some of the best world dj's and musicians, and collaborating with famous italian clubs, organizations and radio stations, such as the infamous RMC - RADIO MONTECARLO NETWORK for which he was the "official dj" of RMC Summetour 2005, alongside of people like Nick The NightFly and MC Nights Orchestra, Giovanni Allevi, Ivan Segreto, Simona Bencini, Nicky Nicolai, Sarah Jane Morris, Ning , Mario Venuti and the infamous brasilian Toquinho.

After 9 years of experience on the decks , he felt the need to produce his own music and he started NIGHTAFFAIR PRODUCTIONS , opening the NIGHTAFFAIR STUDIOS (actually based in Benevento,Milano and opening soon 2 affiliate offices and studios, as well, in 2 important international venues) .

After 1 year he created the eclectic JAZZAFFAIR COLLECTIVE project , involving the most talented italian jazz,blues and pop musicians.

He also sings and plays several instruments but most of all percussions and chromatic percussions (congas, timbales, vibes,udu drums and almost all afro/cuban instruments).

As in his productions as in his dj sets or live perfomances you can find sounds and atmos flavoured of 60’s Brazilian vibes, 70’s Afro mood, early 80’s new wave and house native feeling, taking a look to Asian and European sounds , in a spacing scene from Bossanova to Samba, crossing by Bebop and Swing, arriving to Spiritual-Deep-Jazzy-House, Trip-Hop, Broken Beat, Lounge and quality Electronica, full of elegance and power, without limits and pre-defined labels, creating a not-ordinary and unique style.

He is present in different worldwide famous compilations and prestigious playlists with tracks like "Love and Fame" (a modern bossa trip from south of Italy to Brazil..) , "Somethin' For Your Mind" (a modern vision of jamaican dub atmospheres with a jazzy and lounge spirit) , "Good Life" (a deep house pearl with a spiritual feeling) , "When The Harmony Smiles PT 1" (a tribute to the fusion era of Weather Report and Yellow Jackets from a soulful house point of view) , to name a few.

Early 2007 he was discovered by the legendary LOUIE VEGA (Masters At Work, Nuyorican Soul, Elements of Life) who wanted him as a new Vega Records recording artist.

His debut release on Vega Records is "Undefined Feeling" , a slammin deep/afro hit which has recieved and it is still recieving great feedbacks, kind words and support from the best dj/producers and media all over the world (4 days after the release , it was  already #1 top seller for 2 weeks at VINYL JUNKIES in London and #3 on TRAXSOURCE  "top downloads" for a week).

The FG Mahogany Mix hypnotically drives from beginning to end with stabs of synth chords and infecting crisp percussion that will have the dance floor in pure sudore (sweat in Italian). While the FG Mahogany Drums Mix is stripped down to bare THUMP.

We at Vega Records are proud to have this gem on our diverse and growing catalog. Grazie tante Fabio!" -Louie Vega

Fabio has recently been nominated ARTIST OF THE MONTH in JAPAN , on FEBRUARY 2008 , rated by the top Japanese Deep House webmagazine www.deephouse.jp .

He has recently been on tour in New York City where, to name a few, he has been at Cielo alongside of Louie Vega and Kevin Hedge at their  wednesday worldwide reknowned party called "Roots" , and he has also been guest (together with DJ Spinna) on XM Satellite Radio 's THE MOVE (Channel 80) , the USA #1 house channel , hosted by Luis Baro , with a share of 500.000 listeners, and he also had the chance to play in several other places such as the historical Axiom Studios in Newark where he was guest together with Darryl James of Kiss FM NYC of the infamous audio/video show called Axiom Sessions , with resident dj Duce Martinez, with a big audience too.

He has also recently been interviewed by the top italian music magazine "Blow Up" (March 08 issue) rated as one of the best italian dj/producers and as one of the few "italian musical ambassadors in the world", alongside of Pasta Boys and others.

In May 2008, the Berlin based german crew of SoundCloud.com (actually the best pro audio network platform) dedicates him their first official software release , calling it "FABIO" and inviting him to play as Special Guest in Berlin for their official launch party (together with other artists from Compost, Sonar Kollektiv , Drumpoet Community, Beatport and other infamous labels and organizations).

In June 2008 he joins the DSOH - DEEPER SHADES RECORDINGS family,  the infamous LARS BEHRENROTH brand new label (a reality in the deep house world since the start),  as a new recording artist.

And the first release on DSOH will be "PAPAWENDA" , a dedication to the pureness of the nature with ancenstral deep rhythms , coming very soon.

In June 2008 Louie Vega invites him first to play for "DANCE RITUAL" , his wordlwide famous weekly radioshow,  as Special Guest Dj (broadcasted on XM Radio - The Move - Channel 80) and then to play in Ibiza for the infamous "LOUIE VEGA AND FRIENDS" , Louie's summer residency party happening every sunday (June/September) , hosted by SOUL HEAVEN (dates tba).